Plus, he talks about the lessons he learned in high school

Nick Lachey‘s been keeping a relatively low profile in recent months, but that’s about to change.

Next, on April 27, he’ll make a cameo on The CW’s One Tree Hill. And later in the spring, his album Coming Up For Air will be released – his first since 2006’s What’s Left Of Me.

As Lachey, 35, criss crosses the country promoting the album s first single, “Patience,” he s also busily singing the praises of his high school alma mater, Cincinnati’s School for the Creative and Performing Arts. Which happens to be the setting for Taking The Stage, a 10-episode series that follows five students as they strive for careers as actors, dancers and singers.

‘Don’t Count Me Out’

“I do give a lot of credit to my experience and my time there, in terms of who I am,” Lachey, who studied drama, vocal music, and instrumental music at the school, tells PEOPLE. “When I went to school there I would have killed for this opportunity, to be able showcase not only who I am, but who I am artistically and showcase my talent on a platform like MTV.”

Lachey – who has been dating girlfriend Vanessa Minnillo, 28, for about three years – says that, like most of the other students, he had a competitive streak. “Oh, yeah! Every show you audition for! It was all about competition, and I think that’s what makes the school such a great experience, because when you get out there into the real world and go to auditions, you got to bring your endgame.

But Lachey admits he occasionally did get a bit cocky: “I remember a time when I was kind of riding a high – I had got a couple of lead [roles] – and I kind of walked into an audition and thought it was mine. But I learned my lesson. I got beat up and I had to take a lesser role.”

If Taking The Stage put Lachey behind the scenes, his cameo on One Tree Hills brings him onto one of TV’s hottest teen shows. And as for his new album, the title says it all. “Coming Up For Air is kind of [saying] “Hey, I’m just taking a break and I’m just coming up for air, and then I m diving right back down, I’m diving right into it again – so don’t count me out.”

RELATED GALLERY:
• Before They Were Stars: Nick shares stage with classmate Carmen Electra
RELATED ARTICLE:
• 2006: Nick takes you inside his tour 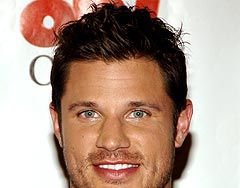