"As a 22-year-old man, I'm a man in all ways, and I'm comfortable with that," he says about his sex life

There once was a time when the Jonas Brothers had zipped lips about their love and sex lives, but Nick Jonas isn’t holding back any more.

“There was so much attention on my sex life at 15,” he says in the May issue of ELLE. “It was uncomfortable. If you were talking about a 15-year-old’s sex life or a 17-year-old’s in any other context it would be totally obscene.”

Jonas, along with his brothers Kevin and Joe, famously wore purity rings early on in their careers.

Though his views regarding virginity have changed, wearing the rings “shaped my view of the importance of sex,” says the singer, who’s been dating Olivia Culpo since 2013. “As a 22-year-old man, I’m a man in all ways, and I’m comfortable with that. It’s freeing now to be transparent.”

Opening up about losing his virginity, Jonas says the one thing he would change about the experience was the “depressing” song he had on. “I don’t want to say what song it was My iPod was on shuffle. It was a bad draw,” he shares.

While the one thing he will never do is have sex to his own music (“It’s so awkward,” he says), Jonas admits he’s wondered “how many babies have been made to ‘Jealous.’ They should be naming their babies Nick or Nicole,” he jokes.

Now out of his teens, the heartthrob says he got a taste of what his female friends in the industry go through after photos of him posing in his underwear took the Internet by storm.

“For me, it’s not so much feeling objectified but more a pressure to maintain a certain look,” he says. “I’ve had a lot of friends – women in the business – that have talked to me about that.”

One plus side? The singer is no longer shy about stripping down to his skivvies. Says Jonas: “I feel like I can change in front of anybody because a lot of people have seen me in my underwear.” 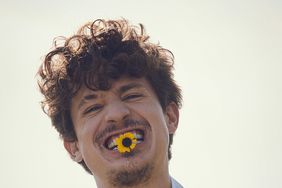