The former Newlyweds are officially over

On Thursday, documents were released in which the former couple asked that retired Superior Court Judge Dana Senit Henry be appointed “for the sole purpose of” ending their marriage. They asked the judge to “bifurcate” the case, meaning to make the divorce official without settling all the financial details.

In fact, money has been a sticking point between the couple. Soon after Simpson filed for divorce last December, Lachey specified that he reserved the right to ask for spousal support, though in a published interview he denied that he planned to ask for alimony.

The end of Simpson and Lachey’s marriage concludes the dramatic final chapter in the relationship of the couple who married in 2002 and then starred together in the MTV reality series Newlyweds: Nick and Jessica, which chronicled their early, happier days together.

In a statement released the day before Thanksgiving last year, Simpson and Lachey announced their split, saying: “After three years of marriage, and careful thought and consideration, we have decided to part ways. This is the mutual decision of two people with an enormous amount of respect and admiration for each other. We hope that you respect our privacy during this difficult time.”

On Dec. 16, divorce papers were filed in Los Angeles Superior Court, by which time Simpson already had begun her new life – by moving into her new $3 million Beverly Hills home. (The Calabasas mansion she had shared with Lachey went on the market for $3.75 million and was bought by Malcolm in the Middle actor Justin Berfield.)

“She’s happy to have a house that’s hers,” someone close to the pop star told PEOPLE at the time. “This is the first time she’s making her own decisions.”

For his part, Lachey confided to Rolling Stone in April that he was taken by complete surprise when Simpson dropped the D-word to him. “I’ll tell you how I knew my marriage was over: I was told,” he said, explaining that he was “blindsided” when his then-wife told him after dinner last November that she wanted to split up.

As for seeking out a new relationship, Simpson told Maxim magazine recently that, “A guy with a great imagination sends me through the rafters. I love it!”

Since the split, both Simpson, 25, and Lachey, 32, have been linked to a variety of new partners. Most recently, she was seen engaging in a public flirtation with Jared Leto. Lachey, alternately, has been said to be romancing Vanessa Minnillo and/or stylist Kim Kardashian.

Professionally, Simpson has been causing quite a buzz with her new video for her single “A Public Affair.” Simpson costars in it with Eva Longoria, Christina Applegate and Ryan Seacrest among others, and shot it recently at a Los Angeles roller rink.

Lachey, meanwhile, has been out promoting his new album, What’s Left of Me. 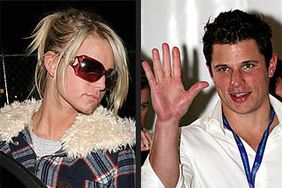