Nick Cannon has high praise for Rozonda “Chilli” Thomas – but are they dating? The America’s Got Talent host is notably coy.

On Thursday, the 35-year-old told PEOPLE that he hadn’t heard the gossip.

“I have not heard those rumors,” he said at the premiere of the documentary Gleason, while also calling the 45-year-old TLC singer “hot” and “amazing.”

“I would be so lucky to be able to be called ‘dating’ her. This is all new to me. I’m not ready for titles and all that stuff,” he said, then added with a laugh, “I’m damaged goods! Who would want to date me? Clearly I don’t get it.”

Earlier this week, E! News reported that the two have been “hanging out,” with a source saying, “[They’ve] been friends for some time and just recently this summer they have been hanging out romantically.”

Although Cannon did not reveal whether he and Chilli are dating, the father of two with ex Mariah Carey said his overall strategy is to take things slow.

“You’ve got to take everything slow. That’s what it’s all about,” he tells PEOPLE. “More than anything, she’s somebody I care for and enjoy spending time with.”

Cannon and Carey filed for divorce last January after six years of marriage. They have two children, daughter Monroe and son Moroccan, both 5, and Carey is now engaged to Australian businessman James Packer.

Meanwhile, Cannon says he “would probably” never get married again. 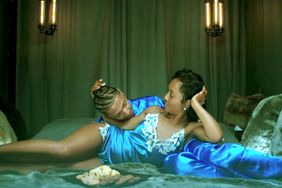