Plus, wedding details: What they wore, which big name attended and what's next for the couple

Actor-producer Seth Green, 36, and actress Clare Grant, 30, were married in a private vineyard in Northern California. “We can’t believe we found each other,” the couple said in a statement. “We’ve never been happier!”

Adding to the intimacy of the ceremony, Craig Brewer, who cast Grant in the lead of his MTV series $5 Cover, officiated at the wedding.

Green continues to voice Chris on the animated Fox series Family Guy and next March will be the lead in Disney’s feature film Mars Needs Moms. Green will also serve as creative contributor to LucasFilm’s upcoming animated Star Wars series – after all, Green is a fan and George Lucas did attend the wedding.

PeopleTV Archive: Seth Green Takes His Show on the Road 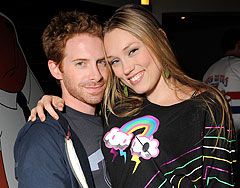