The Apprentice star, who just welcomed a son, will audition hopefuls for his show on Friday

Donald Trump and wife Melania may have welcomed a son on Monday – Barron William Trump, 8 1/2 lbs. – but the new father will be back to work on his The Apprentice on Friday, when he oversees auditions for his NBC reality program’s next season.

Hoards of hopefuls are expected to line up by 8 a.m. at Manhattan s Trump Tower where interviews are set to commence at 9 a.m. The new season of the show – its sixth – will, for the first time, be set in California instead of New York.

Applicants should be able to “to take risks, bounce back after failing, succeed in a cutthroat environment, go against the tide, remain focused and think creatively and be a leader,” according to a press release from the show.

Meanwhile, Trump can obviously multitask. Just hours after his son was born early Monday morning, the new dad was announcing the birth on MSNBC’s Imus in the Morning. “I continue to stay young, right? I produce children, I stay young,” he said during the telephone interview. Trump already has four children by his two former wives, Ivana and Marla.

Of his wife Melania, Trump said, “I just think she’s looking forward to being a great mother. I have no doubt how good she will be.”

As for traveling with her busy husband, Melania told PEOPLE last summer that she planned to spend the first few months after the birth close to home. But eventually we will take the baby with us.” 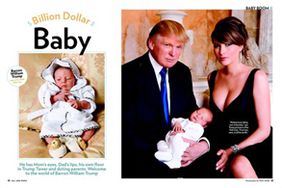