Despite earlier declarations that he would fight extradition to the U.S. to face charges that he murdered his wife and baby, Neil Entwistle told a judge in a London courtroom Friday that he would voluntarily return to Massachusetts as soon as possible. It is expected that he could be arraigned as early as next week.

As Entwistle, who was arrested by British authorities on Thursday, left the Bow Street Magistrates Court, he mouthed the words to his father, Cliff Entwistle, “Don’t worry, Dad. I’m okay.”

Entwistle, 27, was arrested at a London subway stop Thursday en route to visiting a friend. He faces two charges of murder in the deaths of his wife Rachel, 27, and his 9-month-old baby, Lillian, in the Boston suburb of Hopkinton on Jan. 20, after which he returned to his native England, having purchased a one-way ticket.

The DA’s office also said that Entwistle had serious financial problems and he may have contemplated committing a murder-suicide when he allegedly shot his wife and daughter as they lay in bed in their rented home.

“He shot Rachel Entwistle in the head and then proceeded to shoot baby Lillian, who was lying on the bed next to her mother,” said District Attorney Martha Coakley. Te Associated Press reports. “We believe that this was intended to be a murder-suicide.”

Since his family was killed, Entwistle had been staying at his parents’ home in Nottinghamshire.

Rachel’s family issued a statement on Thursday saying they were “deeply saddened” by the arrest. “Rachel and Lilly loved Neil very much. Neil was a trusted husband and father, and it is incomprehensible how that love and trust was betrayed in the ultimate act of violence,” the statement said.

Friends and neighbors expressed surprise about Thursday’s events. “I’m really shocked,” said David Thorpe, a school friend of Entwistle’s. “It’s not the sort of thing you expect to happen to someone you once knew at school. I considered him a friend.”

The couple originally met at the University of York in 1999 and lived in England until last year, when the American-born Rachel, who taught school in Worcestershire, said she wanted to live closer to her parents in Massachusetts. Their daughter was born last April.

On Feb. 1, Rachel and Lillian Entwistle were laid to rest together in a wooden casket at a service attended by about 500 mourners – but not Neil Entwistle. The memorial service was at the same Roman Catholic church where the baby girl had been baptized not two months earlier.

Entwistle Searched 'How to Kill'

Cops: The Husband Did It 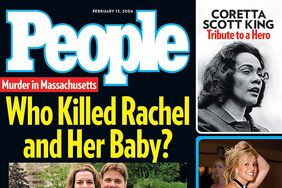