Now a part of American history, the restored flag is on display at the National September 11 Memorial and Museum

After being unearthed from the rubble of the World Trade Center, lovingly repaired by veterans and tornado survivors and visiting all 50 states, the National 9/11 flag has finally made it home.

The flag’s arrival this week at the National September 11 Memorial and Museum in New York City marks the end of a 14-year journey.

“The National 911 Flag is the sum of many parts,” Seidler Ramirez, the chief curator of the museum told The Huffington Post. “Its metamorphosis from a symbol of nationhood at Ground Zero – ravaged by the harsh conditions of its service – into a larger icon of healing, hope and human kindness, is an inspirational journey that summarizes what people can do collaboratively in response to an immense tragedy.”

The 30-foot American flag was flying proudly at 90 West Street in Lower Manhattan when it was destroyed in the aftermath of the collapse of the World Trade Center, according to the New York Says Thank You Foundation. It was unearthed from the rubble in late October 2001.

A construction crew hung the flag near Ground Zero as a symbol of hope for volunteers searching for survivors amid the wreckage. However, it kept getting caught on scaffolding and the site of a tattered flag upset some workers, Fox News reports.

Construction manager Charles Vitchers took down the flag and kept it in a shed for seven years. “When I took the flag out of the bag that it had been in, it brought back all of the smells that were prominent down here at Ground Zero,” he told the news network.

In 2008, Vitchers traveled with non-profit New York Says Thank You to aid in relief efforts following a tornado that leveled 95 percent of Greensburg, Kansas. A group of women in the town began to work on restoring the 9/11 flag using patches from flags that had survived their community’s disaster.

From there, the flag traveled on a 50-state journey where it was repaired by an estimated 30,000 Americans, including wounded warriors, veterans, first responders and 9/11 family members. Repairs were made using material from retired flags from all 50 states, including threads from the American flag Abraham Lincoln was laid on after his assassination and the flag that inspired Francis Scott Key to write The Star-Spangled Banner.

On the 10th anniversary of 9/11, the final restorative patches were sewn in by more than 1,000 tornado survivors in Joplin, Missouri.

“I think all of us will tell you [Sept. 11, 2001] was the reason we became a firefighter, so it was pretty neat to be part of something like that,” Kolby Tucker, a driver and engineer with the Joplin Fire Department who helped stitch the flag, told the Joplin Globe.

On Thursday, the flag went on display in its new home at the National September 11 Memorial Museum.

“When you look at this site, it is a sign of the resilience of the American people,” Charlie Vitchers, the construction superintendent at Ground Zero, told HuffPo. “This flag will forever symbolize that resilience for generations to come.”

Inside the 9/11 Memorial: Up from the Ashes 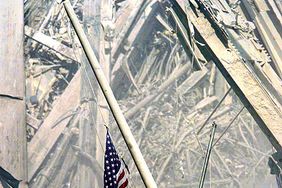 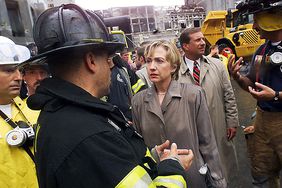