From Tina to Tots: Catch Up with the Cast of 'Napoleon Dynamite' 10 Years Later

Napoleon Dynamite turns 10 on Wednesday, so we “guess you can say things are getting pretty serious.” On June 11, 2004, the delightfully strange tale of an awkward yet confident high-schooler dancing his way through life hit theaters.

Made on a budget of $400,000, the film went on to earn $44 million at the box office and has grown into a comedy classic, thanks to its quirky characters, ridiculously quotable conversations and a finicky llama named Tina. School elections and tater tots will never be the same thanks to Napoleon and the rest of the crew.

To celebrate the movie’s anniversary, the cast reunited at Fox Studios in Los Angeles and unveiled a bronze statue of the titular character – complete with tetherball. PEOPLE was there to catch up with the former residents of Preston, Idaho, and see what they are up to now.

The one and only Liger-tamer Napoleon Dynamite

Favorite Movie Moment: “My favorite scene from the movie has always been the Rex-kwondo scene,” Heder admitted through chuckles. “Rex beat up poor little kids – smacked them around.”

What’s Next? Heder is working on an array of independent films and is recording a voice character for the upcoming Disney series Pickle and Peanut. “I play Pickle. I’m really excited for that,” he shared.

Favorite Movie Moment: “For Pedro, I really like when he says, ‘If you vote for me, all of your wildest dreams will come true,'” Ramirez told PEOPLE.

What’s Next? “I’m working on Bordertown with Seth MacFarlane – the creator of Family Guy,” he shared. “It’s a new show and it comes out next year.” Ramirez is also working on the film Endgame with Modern Family‘s Rico Rodriguez.

Favorite Movie Moment: “I mean the dance is just hands down one of the best scenes ever,” gushed Duff.

What’s Next? Fresh off the Veronica Mars movie, fans can see Majorino in the TNT miniseries Legends starting August 13.

What’s Next? After romancing LaFawnduh, the actor has gone behind the camera, spending the past 10 years pursuing directing and photography.

What’s Next? After appearing in the first two Taken films, Gries will reprise his role as Casey for the franchise’s third installment due in 2015. Until then, Gries has several films slated for release this year.

The Writer/Director/Mastermind behind Napoleon Dynamite

Favorite Movie Moment: “I think my favorite scene is the chicken farm scene where Napoleon gags on orange juice full of egg yolks. I used to work for the old farmer that talks about finding Shoshone arrowhead,” Hess revealed. “He lived in my neighborhood and I really loved that guy.”

What’s Next? Hess has followed his first film with other endearingly odd movies like Nacho Libre and Gentleman Broncos. Currently, Hess is working on Don Verdean, starring Sam Rockwell, and Loomis Fargo with Kristen Wiig and Owen Wilson. 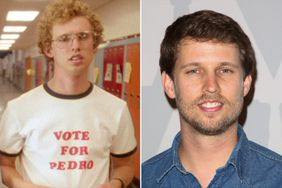 The 'Napoleon Dynamite' Cast: Where Are They Now?