After her arrest in New York City, the supermodel spends time in South Africa

Even second-degree assault charges (for allegedly throwing her cell phone at a housekeeper in New York City last week) couldn’t keep Naomi Campbell from a peacekeeping mission in South Africa.

Spokeswoman Erika Vegter said that Campbell was not an official guest of UNICEF, but that the agency was aware of her visit. Vegter added that, as far as she knew, Campbell had left South Africa as of Tuesday. Details of the meeting with Mandela were not disclosed, and media were not invited.

Campbell was arraigned on assault charges on Thursday, but was allowed to keep her passport so that she could go on this trip.

The model, who calls Mandela her “honorary grandfather,” has met with him a number of times in the past.

As for Quincy Jones, his Listen Up Foundation offers, among other things, an intercultural exchange between underprivileged youth from South Africa and Los Angeles. In 2005, Jones won the U.S. Fund for UNICEF’s Spirit of Compassion Award.

Campbell is due back in Manhattan Criminal Court in June. 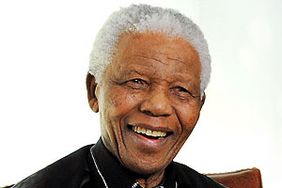