The star, whose book Full of Life came out this week, dishes on her knee surgery and life as a mom

All sorts of progress is being made in Nancy O’Dell’s household these days: The Access Hollywood co-host, who injured her knee while rehearsing for Dancing with the Stars, is making strides after surgery last month – and her daughter Ashby, 22 months, is learning how to talk.

“Her first word was ‘apple,’ ” says O’Dell, whose book, Full of Life, hit bookstores this week. “I opened the fridge and she pointed at an apple and just blurted it out. I started jumping up and down and screaming and dancing! She must think apple is the most delicious fruit on the planet by my reaction.”

After her “apple” epiphany, little Ashby just kept going from there. “Now, she is repeating everything we say like a parrot,” says O’Dell. “She loves to say ‘I did it’ when she completes a task. But my favorite is when she asks me for something and says, ‘Mama, peeeaaassse!’ It sounds so sweet, I pretty much give her anything she wants.”

Getting Ready to Run

As for her knee surgery three weeks ago, O’Dell is already back to walking normally despite the occasional swelling. “I’m excited to get to my eight weeks of physical therapy so I can start running again!” she says.

In her new book (full title: Full of Life: Mom to Mom Tips I Wish Someone Had Told Me When I Was Pregnant), O’Dell, who gave birth to Ashby Grace in June 2007, shares everything from unusual cravings to what really goes on in the delivery room.

Her mother Betty, who passed away last June after battling Lou Gehrig’s disease, also plays a role in the book: O’Dell shares her mother’s Spice Cake recipe made with prunes for “the not so glamorous constipated days,” she says.

O’Dell is a spokesperson for the Muscular Dystrophy Association’s ALS division to help raise awareness and fund research for the disease. 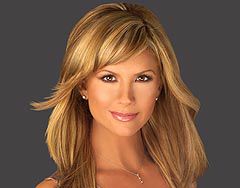 Nancy O'Dell Launches Charity in Memory of Her Mom 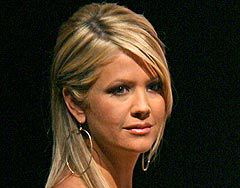 Nancy O'Dell Grieves the Death of Her Mom

Nancy O'Dell Hopes to Set An Example For Ashby