Hillary Rodham Clinton, the all-but-declared candidate for the U.S. Senate from New York, spent part of Wednesday checking out the new Clinton digs in Chappaqua, N.Y., the Associated Press reports. ”There’s got to be some space for both of us to work at home,” she said, referring to President Clinton. ”And there has to be some space for his music and exercise equipment.” On Monday, the Clintons became the official owners of the five-bedroom house, presumably bought to satisfy a state residency requirement if she decides to enter the Senate race against that other undeclared candidate, New York Mayor Rudolph Giuliani. No move-in date has been set, perhaps because the Clintons don’t yet have a key to the house. ”The Secret Service has the key,” Mrs. Clinton said. 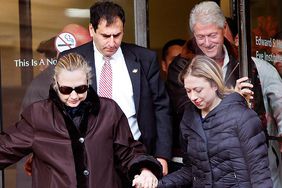