“I feel like I have a true partner,” Williams told PEOPLE Wednesday evening at his 50th birthday party at the New York City club Pacha. “I think there’s a mutual respect that we have for each other that transcends anything I’ve ever experienced in my life.”

Williams proposed to his new fianc e, Tara Fowler, an American Airlines flight attendant, at the restaurant Tavern on the Green in front of both their families on Wednesday.

“I was very surprised. I had no idea,” Fowler said of the proposal. “(Montel) is just a beautiful person inside and out and I love and respect him a lot. I’m very happy, very fortunate.”

As for the wedding plans, Fowler, who met Williams a year and a half ago, says they haven’t picked a date yet, but would like to have an intimate ceremony. “I’d love a small wedding with just close family and friends.”

This is the third marriage for Williams, who has four children – two from each of his previous marriages. 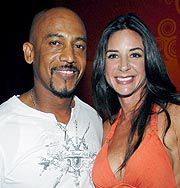