The country star parties at a pre-Derby bash alongside Kid Rock, Joey Fatone and others

Country gal Miranda Lambert got into the Kentucky Derby spirit Friday night – with a little help from her girlfriends.

“The House That Built Me” singer, 29, danced, drank, pumped her fists in the air and eventually performed at the annual black-tie Barnstable Brown Gala event, hosted by Grey Goose, held at a mansion near Churchill Downs on Derby Eve.

The Texas native and animal lover was dressed like a southern belle – complete with a peach fascinator perched on her head – hung out at a table flanked by four girlfriends and looked like she was having a blast during the other performances.

She rocked out when fellow country star Eddie Montgomery of Montgomery Gentry took the stage, pumping her fists in the air when he performed the “My Town.” Later, she swayed back and forth and sang along to “My Girl” during Smokey Robinson’s performance. (Hubby Blake Shelton was nowhere to be seen, but perhaps he was prepping for The Voice live shows that kick off Monday.)

Lambert got on stage after midnight and performed two songs, including a Patsy Cline hit, while Kid Rock and Joey Fatone hung out and smoked cigars. Tom Brady, sans Gisele, was also spotted hanging out at the back of the party with a rowdy group of buddies.

Although it was an upscale affair, Lambert ended the evening in casual country-girl style: she kicked off her heels and walked barefoot into the limo.

•With reporting by LEDATTA GRIMES 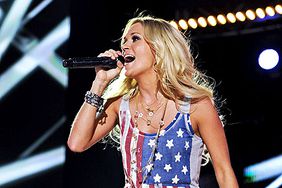