“Both mother and son are doing very well and are both very healthy,” the actress’s rep Ed Choi, tells PEOPLE. “The entire family is thrilled at the addition of a baby brother for their daughter, Mattea.”

The couple’s first child, Mattea Angel, was born in November of 2004. Shortly after the birth, Backus told PEOPLE: “(Mattea) is the cutest little baby in the whole wide world.”

When Sorvino announced in January that she was expecting her second child, she told PEOPLE: “I’m so excited that Mattea is going to have a sibling. We’re going to be a family of four.”

Sorvino, 38, and Backus, 24, married in June of 2004. They met at a friend’s charades party the previous summer. “He walked into the kitchen looking for silverware. We saw each other and something made us want to talk to each other more,” Sorvino told PEOPLE of the couple’s first encounter.

The pair got engaged within a month of meeting and had two weddings. The first was a private civil service at the Santa Barbara Courthouse, the second a hilltop ceremony in Italy’s Capri, where guests feasted on pasta in lobster sauce and a three-tier chocolate sponge cake topped with Mira and Chris lookalike figures.

“Mira looked like a young girl in seventh heaven,” one witness told PEOPLE of the Italian ceremony.

Sorvino, who is the daughter of actor Paul Sorvino, won an Academy Award for Best Supporting Actress for her role in Woody Allen’s 1995 film Mighty Aphrodite. 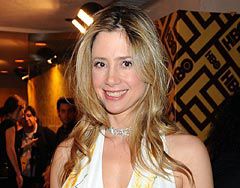