"That's supposed to be a good example?"
– Miley Cyrus, saying she didn't get in Taylor Swift's "Bad Blood" music video, to Marie Claire

"Black people don't know nothing about no push presents. The baby is the present."
– Ice-T, declaring that he won't be giving wife Coco a gift after the birth of their daughter, on Watch What Happens Live

"I didn't think it would last this long."
– Serena Williams, on her 16-year-long tennis career, to New York magazine

"It's important to be able to come back home and just chill and be a regular person. If you lose that, then you lose everything."
– Ansel Elgort, on balancing his career with his personal life, to Teen Vogue

"I was 15 years old with [size] F [breasts]. How do you navigate that?"
– Ariel Winter, on her decision to undergo breast reduction surgery, to Glamour

"Everything about filmmaking is nerve-racking. You're supposed to be at your best when you're most relaxed, and yet everything about being on set is unrelaxing."
– Eddie Redmayne, on the not-so-glamorous side of his job, to Out magazine

"Why do people feel they have the right to criticize a parent about their own children without having any facts?"
– David Beckham, after the media slammed him for allowing 4-year-old daughter Harper to continue using a pacifier, on Instagram

"I've learned to love my body at every stage! I'm going to get even bigger amp that's beautiful too!"
– Kim Kardashian West, shutting down critics of her pregnant body with a nude selfie, on Instagram

"I have always kind of believed that part of the rumors of celebrity couples were sort of true – because they had never been a part of my life."
– Anna Faris, admitting that cheating rumors about husband Chris Pratt have been "weirdly stinging," to FOX411 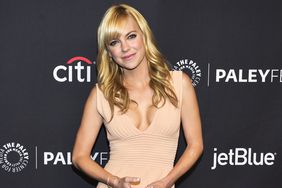