A showbiz trooper since he was a toddler, Rooney was one of Old Hollywood's biggest stars

Mickey Rooney, the supercharged child vaudevillian who grew up to become MGM’s biggest star – despite barely standing over 5 feet tall – has died at the age of 93.

Rooney, who had been in ill health for some time, passed away on Sunday, TMZ reports. According to the Associated Press, he was surrounded by family at his North Hollywood home, police said. The Los Angeles County Coroner’s office said Rooney died a natural death.

A genuine showbiz legend whose career, like his personal life, was often likened to a roller-coaster, Rooney was multi-talented, eight-times married and many times written off, only to land back on his feet again and again. And while many of his personal tales were fanciful – Mickey Mouse was not named after him, despite his claim – movie fans adored Rooney and respected filmmakers idolized his sizeable gifts, which were sometimes likened to genius.

Literally born in a trunk in Brooklyn, Rooney, whose original name was Joe Yule Jr., was a toddler in his parents’ stage act before making his screen debut, playing a little person, when he was 6. After his parents’ marriage broke up, his mother took him to Hollywood and got him cast in the role of Mickey McGuire in a series of 78 short films that led to his being signed to MGM at age 14.

At 17, he first played Andy Hardy, the all-American boy next door, in what would ultimately become a 15-movie series. These family dramas, mostly about Andy’s dating problems, became so popular that Rooney was propelled to the top of the national box-office chart. He was also frequently paired with the studio’s singing powerhouse Judy Garland, and the two were not only America’s sweethearts – and the screen’s first teen idols – but beloved by MGM’s financiers.

Offscreen, Rooney was already far from being the boy next door. Speaking to PEOPLE in 1993, the star discussed his many wives, from his 1942 marriage with Hollywood’s long-reigning sex symbol Ava Gardner, to his eighth and final one, to singer-songwriter Jan Chamberlin, whom he wed in 1978. In the process, he had nine children, two stepchildren and four grandchildren.

“My partners,” he said about his former wives, “weren’t what we call in horse racing parlance routers. They were sprinters; they went out of the gate, but then they stopped. They couldn’t go the distance.”

Gorgeous Gardner, only 19 when they wed, failed to share Rooney’s love of golf and ponies. The marriage ended “abruptly,” said Rooney. “She just told me she wanted a divorce.”

Second wife Betty Jane Rase, Miss Birmingham (Ala.) of 1944, was “totally oblivious to anything going on outside our home.” Rooney recalled. “We just weren’t compatibly compatible.”

Wives No. 4 and No. 5, model Elaine Mahnken and California beauty queen Barbara Ann Thomason (who followed wife No. 3, actress Martha Vickers), apparently presented similar problems: Rooney admitted to cheating on both. In 1965, Thomason began an affair with actor Milos Milosevic. The two were found dead in a murder-suicide in the Rooneys’ L.A. house in 1966. “I died when she did,” Rooney said. “I am furious at what happened to her.”

He rebounded with a 100-day marriage to Thomason’s close friend Marge Lane. “I think that was her name, anyway,” he said.

“The fact is,” Rooney told PEOPLE, “man was not meant to live alone, nor was woman. That’s why I persisted and finally found Jan.”

Wife No. 7 was Carolyn Hockett, from 1969 to 1975. And though Chamberlin had her hands full with Rooney, he said this final marriage worked because she let him think he was the boss – though in 2011, when her husband testified before Congress about elder abuse in this country, Jan Rooney said Mickey was not an abused elder, as he claimed.

When the studio system collapsed after World War II, Rooney still managed to land star roles, although by the mid-’50s, following a stab he took at TV, these dwindled to character parts.

Rooney delivered an embarrassing turn as the toothy Asian neighbor of Holly Golightly (Audrey Hepburn) in 1961’s Breakfast at Tiffany’s, though the following year he shined again, this time as a boxing trainer in Requiem for a Heavyweight, with Anthony Quinn and Jackie Gleason. In 1963 there was the blockbuster ensemble comedy It’s a Mad, Mad, Mad, Mad World, which helped put Rooney back on the box-office chart, albeit briefly.

After a decade-long career slump, during which he swore off liquor and became a born-again Christian, Rooney received a Best Supporting Actor nomination for 1979’s The Black Stallion – at the same time he was wowing Broadway audiences with the burlesque show Sugar Babies with another MGM veteran, tap dancer Ann Miller.

In 1981, Rooney won an Emmy for playing a mentally challenged man in the TV movie Bill, and in 1983 the Academy of Motion Pictures Arts and Sciences awarded him a special Oscar, “In recognition of his 50 years of versatility in a variety of memorable film performances.”

Summing up his tumultuous, if colorful, life, Rooney said in his 1991 autobiography Life Is Too Short, “Had I been brighter, the ladies been gentler, the Scotch weaker, the gods kinder, the dice hotter – it might have all ended up in a one-sentence story.” 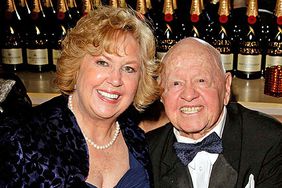 'I Loved Them All': The Many Wives of Mickey Rooney

Confession of a Much-Married Man

Picks and Pans Review: Life Is Too Short 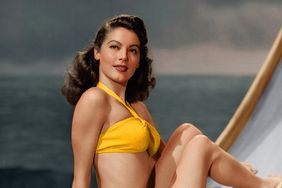