Mourners at Ledger's wake jump into the ocean at sunset. "It's exactly what Heath would have wanted," one tells PEOPLE

What started out as a subdued wake after Heath Ledger‘s funeral ended in an emotional goodbye by mourners including Michelle Williams, who all took a plunge into the ocean as the sun began to set.

“It’s exactly what Heath would have wanted,” one mourner told PEOPLE, dripping wet in his underwear as he made his way out of the water.

An unidentified man led Williams by the hand, followed by several guests, who walked down the stairs behind the Indiana Tea House on Cottesloe Beach, the site of the wake and one of Ledger’s favorite spots.

At least 50 people attending the wake ran onto the beach and many began to take off their clothes. While some women took the plunge in their black dresses, other men and women stripped down to just their underwear and jumped into the ocean.

Williams, still wearing her cream-colored sundress and black sunglasses, was briefly dragged into the water as everyone cheered. She was then quickly surrounded by a group of mourners, creating a protective circle around the actress.

As the sun began to set, the swimmers came on shore and stood in a line on both sides of Williams and linked arms. In the last five minutes, as the sun moved toward the horizon, the mourners stood in silence, watching and embracing.

Williams hugged Kate Ledger and smiled as she watched the sunset at 8:15 p.m., local time.

Two mourners in the group summoned up the moment as they stood behind Williams.

“The sun goes down on our love,” they said. “But it will never go down on Heathy.”

Williams left the wake with Ledger’s mother Sally Ledger Bell and her husband Roger Bell at 9:20 p.m., local time. Ledger Bell held on to Michelle as they got into a black SUV. Once inside, Sally rested her head on Williams’ shoulder as the car drove away.

Your Most Amazing Photos of the Year 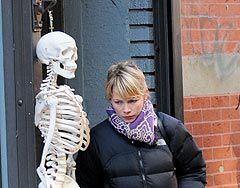