Michelle Obama and her daughters hit up their hometown on Thursday, swinging into Chicago for a day of both work and fun.

After speaking at a Democratic National Committee fundraiser at the Waldorf Astoria hotel, where guests paid $500-$20,000 for a spot, the first lady then headed to pan-Asian restaurant Sunda for dinner, where she was joined by daughters Malia and Sasha and a group of friends, a source tells PEOPLE.

The group went directly to the second floor, which was closed to the public. The mood appeared light, as Obama – wearing an all-black ensemble accented with shiny gold jewelry – snapped photos with Sunda owner Billy Dec and his staff.

After dinner, the first lady and her girls headed to Soldier Field to catch pals Beyoncé and Jay Z in their On the Run tour. Around midnight, the Obamas then returned to their home in Chicago’s Kenwood neighborhood to spend the night.

The Obamas weren’t the only high-profile family enjoying their stay. While Beyoncé and Jay Z were in town, they – along with daughter Blue Ivy – grabbed dinner on Wednesday at Chicago Cut Steakhouse.

The meal started out with tuna tartare and sliders, a source said. Afterward, Jay Z – clad in Timberland boots, Diesel jeans and a T-shirt – enjoyed a steak. Beyoncé, meanwhile, dined on salmon as she sat decked out in a No. 4 Dallas Cowboys jersey with her husband’s surname, Carter, emblazoned on the back. For drinks, the couple opted for rosé wine.

“They looked happy,” an onlooker said. “They were laughing.” Blue Ivy also appeared to be enjoying her visit. She was “jumping up and down in the booth,” according to an eyewitness. 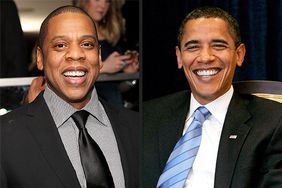