From one glove to white socks to military jackets, see how Jackson set trends for a generation and hear the scoop on the behind-the-scenes team responsible for the styles.

For his 1982 teen gang video "Beat It," the singer picked a casually

jackets in a decade-defining look for the '80s.

Debuting the moonwalk live at the Motown 25th Anniversary

celebration in 1983, the dancing star wore his signature cropped pants - designed to show off his intricate footwork to its fullest - with

sparkling socks, shirt and his omnipresent penny loafers. Ken Luftig Viste, curator of the Grammy Museum's Michael Jackson: HIStyle exhibition, explains, "He'd wear an elaborate outfit like this so that even the people in the farthest rows could see him dance because the crystals are flashing under the lights.The white socks really also showed off the way he danced, the ways he could move and how much of that was footwork," says Luftig-Viste. "He wanted people to be able to see him dance."

Setting off a massive trend, Jackson wore just one bedazzled glove to the

1984 Grammys along with a sequined military jacket, complete with gilded

sash. Not only did he get fashionistas buzzing, he also picked up a

record-breaking eight awards that night. Jackson was very into "British regalia show clothes - over the top military themed items," says longtime costumer Michael Bush, who would research historically correct military gear for Jackson, and then "do a street version, rock and roll look out of plastic, vinyl. Anything other than what was traditional!"

in 1987, adding heavy eyeliner to a buckled leather jacket and skintight

"Smooth Criminal" in 1987. Forget the tommy guns - fans were blown away by

his sharp tailoring and matching fedora!

Never one to shy away from theatrical embellishments for his stage costumes,

Flanked by similarly dressed backup dancers, Jackson took to the stage of

the 1995 MTV Video Music Awards in a black suit, skinny black tie and - ever

Talk about a united front! The singer enters for a court date, with his sisters LaToya and Janet, in white head-to-toe in 2004.

In the past several months, Jackson began stepping out in

fashionista-favorite womenswear labels, including Balmain and this Givenchy

The Thrill of It 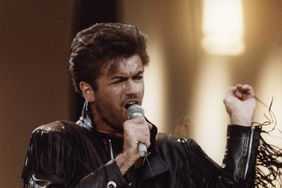