A record price for Hollywood memorabilia was set Saturday at a Sotheby’s New York auction when Michael Jackson (bidding over the phone through an agent) paid $1,542,500 for producer David O. Selznick’s 1939 Best Picture Oscar for “Gone With the Wind.” The price shattered the previous mark of $607,500 (set in 1996) for the Oscar won by Clark Gable as Best Actor for the 1934 film “It Happened One Night.” The pre-sale estimated price for the Selznick trophy had been $300,000. 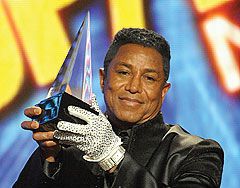