Michael Jackson s cousin Phyllis Fossett Turner skipped a family reunion in Little Rock on Friday to attend the memorial service for the pop star in his hometown of Gary, Ind.

But the event, held in the 6,000-seat minor league baseball stadium where Jackson played to adoring fans in 2003, turned out like a reunion itself for Jackson s local extended family, most of whom did not attend the Los Angeles service.

About 20 Jackson cousins – ranging in ages over five decades – sat in the front row of folding chairs on the infield of the packed RailCats US Steel Yard stadium to watch local performers pay homage to Michael. They wore white T-shirts adorned with photos of Jackson posing with each of them during his 03 visit, with the words RIP on the front and Reunion on the back.

Michael s father Joe Jackson arrived two hours into the service, flanked by bodyguards, as the Rev. Jesse Jackson Sr. was speaking. The Jackson patriarch briefly took the stage to greet the crowd and accept a 7-ft.-by-4-ft. granite plaque – etched with Michael s tip-toe pose and his birth and death dates – from Gary mayor Rudy Clay, who is aiming to turn Michael s childhood home into a museum.

I ve said it time and again, if we can do it for Elvis we can do it for Michael in Gary, Indiana, said Clay. Now we are going to make it happen with junkyard tenacity. The Jacksons moved from the city when Michael was 11.

‘Gary Was Built on Music’

The night s loudest cheers went to dancers from Unity of Purpose, who performed to Smooth Criminal. Choreographer and dance coach Toni Simpson said the show was a tribute to Jackson s lasting influence on the city s music scene. Gary was built on music, this was a place where you d go garage to garage and watch families perform together for 35 cents, she said. That atmosphere still exists.

A church group recreated the Thriller video, with about 100 members in full makeup and torn ball gowns staggering through the audience on their way to the stage. In short speeches, Jackson s retired elementary school principal recalled him stealing the Christmas show, and a former neighbor remembered how young Jackson would wait on the corner for her after school to see the jewelry her boyfriend had given her.

He wanted to see the opal, the pearl, the birthstone, said Jacqueline Davis Staten. His interest was so persistent that she started running home to avoid him. If only I knew then what I know now!

Most of the cousins in Gary had not kept in close touch with Michael s immediate family, but his death was nonetheless a wrenching blow. Second cousin Rita Kelly, 51, cried as a local choir hundreds-strong held candles and sang We Are the World in the humid night air.

We might not have seen him in 10 or 15 years, but it s still family, said Fossett Turner, 55. You don t see him, but that doesn t mean the love isn t there.

Tarneshia Sutherland, 41, said Jackson s death and the ensuing tributes have brought the extended family together.

This drew us closer, she said. Now that he s gone I hope it can continue.
from Huffington Post
WATCH: Emma Watson Talks Wardrobe Malfunction
Paulina Porizkova Describes Getting Fired From Top Model 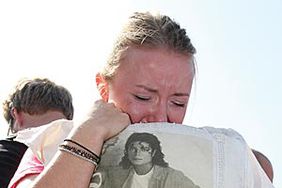