A good night for dancing under the stars.

Beloved Little House on the Prairie star, Gilbert, 48, and Busfield, 55, got engaged over the holidays. Both have been married twice before. She is the mother of two; he has three children.

The historic San Ysidro Ranch has been the scene of a number of Hollywood weddings celebrations. Drew Barrymore and Will Kopelman had their rehearsal dinner there, while Hilary Duff and Mike Comrie stayed there on their wedding night. 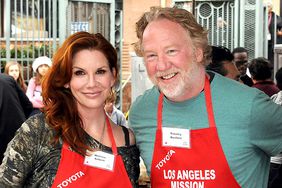