In the split with Tammy Lynn Michaels, Melissa Etheridge seeks joint custody of their twins

In a Petition for Dissolution of Domestic Partnership filed in L.A. County Superior Court, the singer, 49, cited irreconcilable differences and asked that the court not award financial support to Michaels.

Etheridge and Michaels, 35, who had registered as domestic partners in August 2005, ended their nearly nine-year relationship late last year. Michaels gave birth to son Miller and daughter Johnnie in 2006.

After the pair announced their separation in April, Michaels blogged that the split was not mutual or amicable, despite Etheridge’s claims to the contrary. 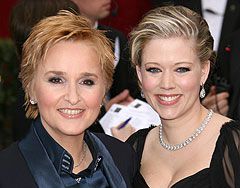