Matthew Morrison: 'We're Having a Lot of Fun' Planning Wedding

For Matthew Morrison, prepping his wedding to model Renee Puente has been a smooth production – just not a speedy one.

“It’s going good,” the Glee star told PEOPLE at his 4th Annual Halloween Masquerade in Hollywood on Saturday. “We’re a little ways out. Probably not till like 2015 so we’re just taking our time. But we’re well into it.”

Fittingly for a song-and-dance man, music will play a big role in the wedding.

“I want my wedding to kind of be a bunch of performances,” he says. “I want all my friends to get up and sing. I have very musical friends so I just want it to be a fun night where everyone just, you know they want to step up to the mic and sing a song.”

At the party, Morrison arrived as Andy Warhol in a shaggy blond wig (Puente went as Warhol’s star actress-muse Edie Sedgwick). Morrison also celebrated his Oct. 30 birthday (he’s turning 35) a few days early by blowing out candles on a cake. 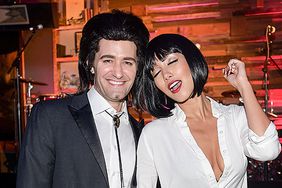