Straight Out of Litchfield: Matt McGorry and Laverne Cox Reunite in Los Angeles

The costars were all smiles in a selfie posted on Sunday

Orange Is the New Black costars Matt McGorry and Laverne Cox explored the great outdoors with a hike in Los Angeles over the weekend. McGorry posted a smiling selfie with Cox to his Instagram account on Sunday afternoon.

“Introducing @lavernecox to the full LA lifestyle experience #hiking,” the 30-year-old actor wrote in the post, showing McGorry in a red tank top and Cox covering up in a black hoodie and oversized sunglasses.

It’s been a while since the two shared the same screen as McGorry’s OITNB character, John Bennett, did not appear in the fourth and latest season of the hit Netflix show. (Cox’s Sophia Burset was featured in the latest season although she had a much smaller role.)

The costars’ hike probably helped Cox recover from her fun night out with Trace Lysette and Angelica Ross. The actress took to her Instagram account to share a Snapchat video of the trio dancing at hotspot the Nice Guy, captioning the clip, “With the girls last night #UpInDaClub @tracelysette and @angelicaross.”

Cox has been busy filming CBS’s Doubt, in which she will be the first transgender actor to play a transgender main character on a broadcast show. In a post leading up to her night out, Cox wrote about her latest projects – Doubt and the upcoming release of The Rocky Horror Picture Show remake.

“Last night out on the town,” she wrote in the post. “Been working so hard on @doubtcbs coming to #CBS midseason. It was great to let loose a bit. @rockyhorrorfox #RockyHorror premieres on @FOXTV Oct. 20 #WorkHardPlayHard #dontdreamitbeit #TransIsBeautiful.” 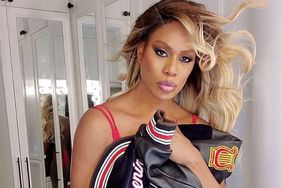