The couple pledged their love again, 10 years after their first meeting, on Saturday in St. Lucia

Matt Damon and his wife Luciana renewed their wedding vows on the Caribbean island of St. Lucia Saturday, PEOPLE confirms.

The couple exchanged vows at sunset as their 50 guests, including their four daughters and actors Ben Affleck and Jennifer Garner, as well as Ocean’s costars Casey Affleck and Don Cheadle looked on.

“It was a very family-oriented and happy celebration,” a source tells PEOPLE. “Many guests brought their children (although Ben and Jen did not). After the ceremony, guests enjoyed an evening cocktail reception on the beach. Children were running around and playing with white parasols.”

Local reports indicate Damon, 42, spent nearly $1 million to rent out the entire Sugar Beach resort to accommodate his family and guests for the lavish festivities.

Damon met his wife in a Miami bar in 2003 when he was shooting the film Stuck on You and she was tending bar. The couple married two years later in a civil ceremony in New York City but never had a larger wedding celebration.

Earlier Saturday, the actor appeared relaxed and happy as he paddle boarded in the crystalline blue waters near the resort. 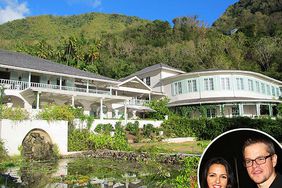