Are Jeffrey Dean Morgan and Mary-Louise Parker back on? Morgan and Parker, who split in June, showed up to the P.S. I Love You premiere Sunday night with their arms around each other and Parker, 43, even held Morgan’s hand while he did an interview.

When asked what he thought about his date – who looked hot in a dangerously short dress – Morgan, 41, responded to PEOPLE, “What about her?” as he raised an eyebrow and flashed a sly grin.

But that’s not to say he only had eyes for Parker. During a cast photo, Morgan playfully grabbed Hilary Swank‘s bottom, who took it all in good humor. Soon enough, he had moved onto Gerard Butler, who told PEOPLE, “Jeffrey Dean Morgan rubbing my ass, yeah that’s about as good as it gets!” 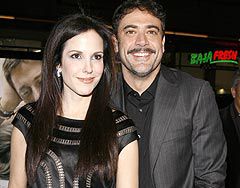