“Mary-Kate Olsen has taken an approved leave of absence from New York University to focus on her increasing responsibilities as co-president of Dualstar Entertainment Group and to pursue personal interests,” says her rep, Michael Pagnotta.

Olsen, 19, shares responsibilities at the company with her twin sister, Ashley.

When asked if leaving NYU has anything to do with Mary-Kate’s health, Pagnotta said, “No, it doesn’t, and this is the most important thing. She’s not reentering any kind of treatment facility or anything like that.”

The summer before classes began, Mary-Kate checked into the Cirque Lodge rehab facility in Sundance, Utah, for treatment of an eating disorder. During her first semester, she continued her after-care treatment with access to two teams of therapists, nutritionists and eating coaches in L.A. and New York, PEOPLE reported at the time.

The twins began attending NYU in September 2004. At the time, they purchased a $7.3 million penthouse in the trendy West Village, but they never moved into the apartment. (They have since rented it out for a reported $35,000 a month.)

This August, it was announced that Mary-Kate planned to spend time on both the West and East coasts and start an independent study program rather than return to classes in New York. She spent much of the summer in Europe, and was often seen with Greek shipping heir Stavros Niarchos III.

“She was deciding between independent study and taking classes (in New York) for the fall semester right up until the last minute,” a source close to the actress tells PEOPLE. After about a month into the school year, the source says Mary-Kate had been back and forth to L.A. a number of times and decided the schedule was too demanding.

As for Ashley’s plans, she’ll “make her own decisions. They are very different people,” the source says.

Regarding their company, Dualstar, this year Mary-Kate and Ashley bought out their business partner, took over the co-presidency of the business, hired a new CEO and expanded the company in new directions – including partnering with a boys clothing line.

“She’s passionate about her business, she’s become very hands-on about it,” says Pagnotta of Mary-Kate, “and there are a lot of new things that are coming from Dualstar that we’re not ready to talk about now.”

Both sisters are expected to attend the 2005 Accessories Council Excellence Awards on Nov. 8 in New York City, where they’ll be honored alongside Sean “Diddy” Combs, Jessica Simpson and Oscar De La Renta.

Mary-Kate on Paris's Stavros: 'I Miss Him' 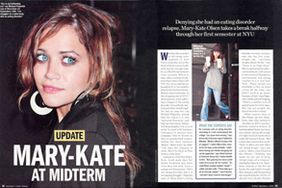