Martha Stewart has a new house to decorate. The billionaire domestic doyenne is set to purchase an estate priced at more than $14.5-million in celebrity-filled Westchester County, reports the New York Post. Her next door neighbor will be designer Ralph Lauren, while others in the ‘hood include Christopher and Dana Reeve, Glenn Close, author Michael Crichton and June Gumbel. The Clintons aren’t that far away, either. The property Stewart is purchasing is said to encompass 137 acres, a 3,200-square-foot manor house (built in 1764), summer and winter homes, a guest cottage, numerous barns and a large swimming pool. (Stewart’s publicist confirmed that Martha has no intention of leaving Westport, Conn., where Martha has been a longtime fixture. Stewart also has a home in the Hamptons, where she and her neighbor, real estate developer Harry Macklowe, have been feuding for years.) “Ralph Lauren and Martha Stewart,” Mike Millius, a Westchester local, mused to the Post, “with all this good taste up here, I might have to iron my flannel shirts.”

Martha on the Move 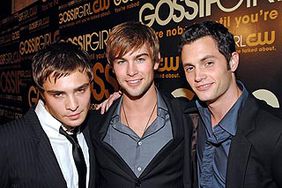 'Gossip' Guys Get Help Sprucing Up Their New Digs