Reality TV producer Mark Burnett (Survivor, The Apprentice) and former Touched By An Angel star Roma Downey were wed in a private ceremony at their home in Malibu Saturday afternoon, PEOPLE confirms exclusively.

“It was wonderful to have shared our big day with our family – Roma, myself, our children and our parents,” Burnett, who’s also producing this summer’s On the Lot on FOX and Pirate Master on CBS, tells PEOPLE. “It was so meaningful and so intimate.”

On a bluff overlooking the Pacific Ocean, Burnett, 46, and Downey, 47, said their “I dos” in a ceremony officiated by Downey’s Angel costar, Della Reese, 75, who is an ordained minister.

Also in attendance were Burnett’s father, Archie, 83, dressed in a traditional kilt, and Burnett’s stepmother, Jean; for Downey, Reese and her husband, Franklin, stood in for Downey’s parents, both of whom have passed away.

At the end of the half-hour ceremony, which included family members reading selected passages from novels and poems, a small plane that Downey had hired as a surprise for Burnett flew overhead with a banner that read, “… and they lived happily ever after.”

Retreating to their backyard, the family settled into a seafood reception with shrimp cocktail, fresh lobster salad and broiled lobster tails. The adults toasted with Cristal Champagne; the kids, with Martinelli’s sparkling apple juice. To finish the day: wedding cake, ice cream and fruit.

The couple, who had been Malibu neighbors for years when they started dating in January of 2004, became engaged last November during a Thanksgiving family vacation in Zihuatenejo, Mexico. The traveling will continue as the pair leaves on a 10-day honeymoon to Jordan, where Lawrence of Arabia was filmed, and London.

Read more about the nuptials in the next issue of PEOPLE, on newsstands May 4.

Plus: Tell us your own wedding story! You could be featured in PEOPLE’s Real-Life Weddings issue 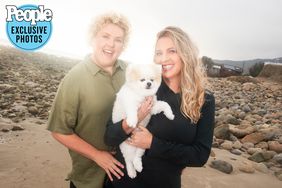