The sources say his relationship with the Thirteen actress was a factor in the Dec. 29 divorce filing by Dita Von Teese, 34, Manson’s wife of one year.

“Dita is heartbroken, she didn’t see this coming,” says a source close to the burlesque dancer and MAC cosmetics model. “His partying contributed to the split as well.”

Manson, 38, and Wood have been friends for some time. According to his official Web site, Manson first met Wood when he asked her to be in his upcoming horror film, Phantasmagoria: The Visions of Lewis Carroll.

In addition, she posed for a watercolor that he painted, and attended the opening of his new Hollywood art gallery, the Celebritarian Corporation Gallery of Fine Art, last Halloween.

“It came as kind of a shock,” Wood told Rolling Stone about being asked to pose. “I was beyond flattered.”

Manson, who is currently in Paris, was unavailable for comment. A rep for Wood would not confirm the relationship. A spokeswoman for Von Teese did not return calls for comment.

Evan Rachel Wood Reveals What Attracted Her to Marilyn Manson

Dita Von Teese Wants a Man with a 'Moderate Lifestyle' 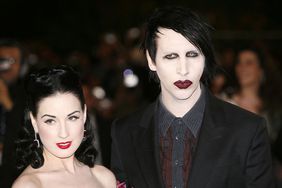