After ending a seven-month engagement, the shock rocker goes clubbing in L.A.

The newly single Manson, 41, then hit the town Saturday night, dining at L.A’s STK and clubbing at next door Boudoir with a group including Twiggy, Manson’s longtime guitarist, and former Playmate of the Year Colleen Shannon.

“They just broke off their engagement, and he needed a night out with friends,” says another source.

While together, the shock rocker proposed to the True Blood actress, 22, during a January stage performance in Paris, according to reports.

The two began dating in 2006 but then broke up in 2008, when Wood was linked briefly to actor Shane West.

They reconciled for a short time, only to split again before becoming engaged last January. 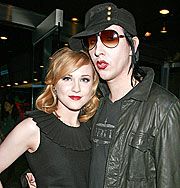