Singer Marianne Faithfull has won her battle with breast cancer, she said Monday.

Faithfull, 59, who discovered that she had the disease in September, has been given the all-clear by doctors. In fact, her recovery has been so successful that she’ll be able to resume touring next spring.

After discovering a lump in one of her breasts while staying with friends in Paris, Faithfull underwent surgery in France on Oct. 11. Because the disease was caught at its very earliest stages, reveals her publicist, Rob Partridge, no further treatment has been necessary.

“She is making a rapid return to full health,” says Partridge.

Faithfull, who rose to fame in the ’60s for singing with – and dating – Rolling Stones frontman Mick Jagger, said in a statement: “It has been an extraordinary experience and, in many ways, extremely positive. I didn’t realize how many true friends I had. I feel so lucky and loved and thank everybody for all their good thoughts.”

The singer-actress was originally due to have embarked on a three month tour of Europe and North America at the start of October. The tour has now been rescheduled with an opening date set for Budapest, Hungary in mid-March 2007.

This is no surprise to her rep who told PEOPLE in September, “Marianne will be on the road for the rest of her life.” 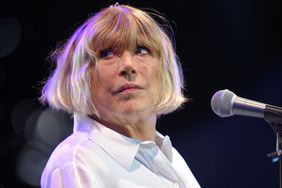