Margot Robbie has a new diamond ring on that finger!

The Suicide Squad star responded to wedding rumors that swirled around the Internet on Monday by showing off her pear-shaped sparkler on Instagram.

The photo came without a caption, but the pose spoke for itself — with Robbie, 26, draped all over her longtime beau, Tom Ackerley.

Australia’s The Daily Telegraph claims the couple wed in Byron Bay over the weekend, although they never announced an engagement. The actress was given away by her mother and her three siblings were in attendance, according to U.K.’s The Telegraph.

Suspicions of possible nuptials first arose last week when Robbie was spotted arriving in her home country wearing a t-shirt that read “Say ‘I Do’ Down Under.”

The Australian actress and the British assistant director first met in 2013 on the set of the World War II drama Suite Francaise. The pair were spotted on several PDA-packed dates later in June 2014.

In the May issue of Vogue, Robbie described Ackerley as “the best-looking guy in London,” and gushed about how she fell for her beau. 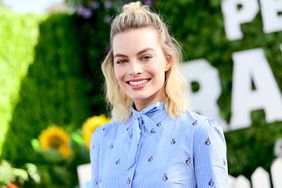