An 18-year-old Russian immigrant, who allegedly has been making death threats against actress Hilary Duff, was arrested Friday in a Manhattan Beach, Calif., hotel.

As TMZ.com first reported and police confirm to PEOPLE, on the afternoon of Nov. 3, they received a tip that Maksim Myaskovskiy “made criminal threats against another person.”

LAPD Sgt. Paul Ford tells PEOPLE, “We arrested Maksim Myaskovskiy regarding making criminal threats and stalking in relation to actress Hilary Duff. Last Friday, Myaskovskiy was contacted by police at a local hotel at the 1700 block of Sepulveda Blvd. Officers conducted an investigation and determined a crime had occurred.”

According to police, Myaskovskiy was then contacted at the hotel by law enforcement and was arrested; an additional charge of stalking was added. His bail was set at $200,000, with an arraignment set for Tuesday.

On Oct. 12, Duff filed court papers alleging that a man named Max and his roommate, Joseph Klein, 50, had made threats against her and boyfriend Joel Madden, 26, during the prior six weeks.

Among them, Max allegedly made repeated claims of his intention to purchase a weapon and “threatened to kill himself and to engage in dramatic actions” to get Duff’s attention because he “believes they belong together.”

The documents also stated that Max emigrated to the U.S. two years ago with the sole intention of entering into a romantic relationship with Duff and has stated that he would “remove enemies” that might stand in his way, namely her boyfriend, Madden. A hearing on the restraining order was set for Nov. 15. 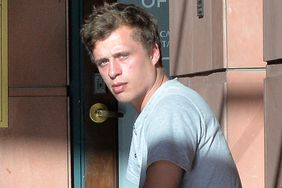