Madonna Takes Her 'Roses' to Paris

Turning up a full hour late — but looking great in short-sleeved black Prada — Madonna arrived at the Ritz Hotel in Paris Monday for the launch of her new children’s book, “The English Roses,” PEOPLE reports from the French capital.

The Material Author, 45, graciously but forcefully told reporters — some of whom still wanted to grill her about that MTV lip-lock with Britney Spears and Christina Aguilera — “Come on, ask me questions about my book. I want to talk about my book.”

Still, other questions did pop up. What about her supposed conversion to Judaism? Didn’t happen, she said, despite her passion for Kabbalah. Nor has she changed her name to Esther.

“My personal feeling is that religions keep people apart,” she declared.

And no, she has no plans to turn her book into a stage production, but she did thank a journalist for making the suggestion.

Would she autograph a copy of her book? No, not even for a children’s home in Toronto.

As for her recent published comments that she wants another child, Madonna said nothing and shrugged her shoulders.

Finally, the kissing question cropped up. It was: Is your daughter (Lourdes, 6) more proud of you for kissing Britney Spears or for the book?

Replied Madonna: “I think my daughter is proud of me whatever I do.”

Madonna to Daughter: I'm Not Gay 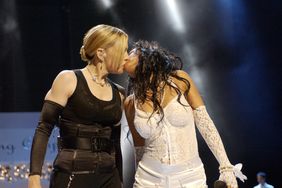