Madonna says Perry is a "bad, bad girl" before the "Roar" singer lovingly calls her "mom"

If Madonna has a squad, you can count Katy Perry in.

The “Roar” singer, 31, joined Madonna, 57, on stage at her Rebel Heart tour concert in Los Angeles on Tuesday – and luckily for fans, their antics are well documented.

“She’s a bad, bad girl. I won’t hurt you,” Madonna said before jokingly kicking Perry’s butt with her heel.

With Perry leaning over, Madonna backed into her as dancers looked on. Then the pals strutted up the catwalk to the beat of a fitting song, Madonna’s “Unapologetic Bitch.”

After they dropped it low a few more times, the music stopped and Perry said, “I love you, mom!”

She later took to Instagram and explained that she was using the pop culture definition of mom, writing, “Because all popstars are code ‘mom.'”

“Well, that was unrehearsed … ” Perry captioned another Instagram video.

Madonna showed her love in a post of her own, writing, “Best Unapologetic bitch ever! Thank you Katy! Thank you L.A.”

Out of all the fun moments, Madonna said the "highlight" was sharing a banana flask with Perry.

This isn’t the first time fans have seen their cheeky dynamic – the duo linked up with Lady Gaga inside the Met Gala in May, and Perry made a cameo in the star-studded "Bitch I’m Madonna" music video.

After her concert, Madonna celebrated her big night at Hyde Sunset Kitchen + Cocktails. 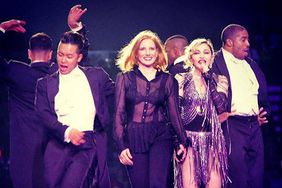 'I Gave Madonna a Spanking': Jessica Chastain Joins the Queen of Pop Onstage in Prague 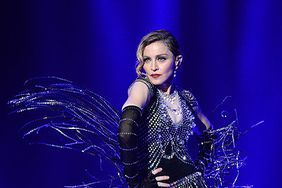