Hollywood and Broadway are mourning the loss of the versatile comedienne and gifted mimic Madeline Kahn, who died Friday in New York after a year-long struggle with ovarian cancer. She was 57 and had gone public with her health battle a month ago, when she said in a statement that she was undergoing aggressive treatment. After an initial stage career, the Boston native burst into the public’s consciousness in the early ’70s as Eunice, the irksome fiancee of Ryan O’Neal in the movie “What’s Up, Doc?” That comic role led to many others, including two of her best (and for which she was nominated for Oscars): as the floozy Trixie Delight in 1973’s “Paper Moon” and as the saloon singer Lily von Schtupp in Mel Brooks’s 1974 “Blazing Saddles.” She most recently played Pauline, a neighbor on TV’s “Cosby.” Last year Kahn married her companion of 10 years, John Hansbury, who has asked that in lieu of flowers, donations be sent to the Ovarian Cancer Research Fund, 1 Penn Plaza, Suite 1610, New York, N.Y. 10119. 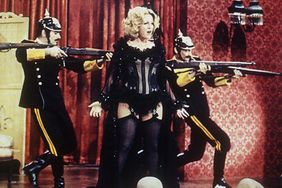 Kevin Bacon, Madeline Kahn and Other Folks Kick Back and Yell Bingo at a Downtown Hoedown