Lou Reed, the influential rock musician-songwriter best known for “Walk on the Wild Side,” died Sunday at age 71, according to a report.

The cause of death was not immediately known. But Rolling Stone magazine, which reported his death, said Reed underwent a liver transplant in May.

As a founding member of The Velvet Underground, Reed was part of New York’s thriving avant-garde art and music scene of the 1960s and a close associate of Andy Warhol.

The album The Velvet Underground & Nico, though never having mainstream success, is now considered one of the most influential rock albums of all time. Loaded in 1970 features two popular Reed songs, “Rock & Roll” and “Sweet Jane.”

After leaving the group in 1970, Reed’s solo album Transformer, produced by David Bowie, included “Wild Side,” the unsentimental ode to Warhol’s world. The song’s famous double bass track makes it recognizable from almost the first note.

Reed, observes Rolling Stone, brought a “whole new lyrical honesty to rock & roll poetry” and that “glam, punk and alternative rock are all unthinkable without his revelatory example.”

He was one of rock’s archetypal tough guys, but he grew up middle class – an accountant’s son raised on Long Island. He hated school, loved rock n’ roll, fought with his parents and attacked them in song for forcing him to undergo electroshock therapy as a supposed “cure” for being bisexual. “Families that live out in the suburbs often make each other cry,” he later wrote.

His real break began in college. At Syracuse University, he studied under poet and short story writer Delmore Schwartz, whom Reed would call the first “great man” he ever encountered. He credited Schwartz with making him want to become a writer and to express himself in the most concrete language possible. Reed honored his mentor in the song “My House,” recounting how he connected with the spirit of the late, mad poet through a Oiuja board. “Blazing stood the proud and regal name Delmore,” he sang.

Reed moved to New York City after college and traveled in the pop and art worlds, working as a house songwriter at the low-budget Pickwick Records and putting in late hours in downtown clubs. One of his Pickwick songs, the dance parody “The Ostrich,” was considered commercial enough to record. Fellow studio musicians included a Welsh-born viola player, John Cale, with whom Reed soon performed in such makeshift groups as the Warlocks and the Primitives.

They were joined by a friend of Reed’s from Syracuse, guitarist-bassist Sterling Morrison; and by an acquaintance of Morrison’s, drummer Maureen Tucker, who tapped out simple, hypnotic rhythms while playing standing up. They renamed themselves the Velvet Underground after a Michael Leigh book about the sexual subculture. 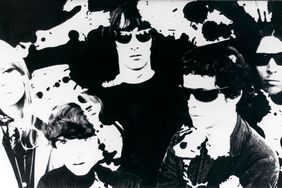