Another chapter in Lindsay Lohan’s very public family life has come to a close: Her parents, Michael and Dina Lohan, decided on Monday to settle their contentious divorce, according to attorneys for both sides.

“Dina and the children are delighted that this chapter in their lives is finally over,” Dina’s attorney, Robert S. Cohen, told PEOPLE. “And it is over.”

The settlement comes the same day the divorce trial was expected to resume. Though terms of the agreement are confidential, a source close to Dina says she is happy with the outcome.

Through his attorney, John DiMascio, Jr., Michael said on Monday, “I’m happy with the agreement and look forward to the opportunity to rebuild my relationship with my children.”

The strife between Lindsay’s parents has very much been in the public eye, and even serves as the basis of several songs on her album A Little More Personal (Raw). Also, in the video for her single “Confessions of a Broken Heart,” which Lindsay, 19, directed, actors playing her parents argue violently as a horrified young Lindsay (played by her younger sister Aliana) cowers.

Before her parents divorce proceeding began over the summer, the actress told PEOPLE, “I don’t think any girl wants to see her parents in this situation…I’ve been hurt.”

But it was clear which side Lindsay was on. “My mom has always been a great support, and she has put so much of her own life into my career,” said the star, who at the time canceled the remainder of her Herbie: Fully Loaded European tour to bolster her mother.

Dina, 43, and Michael, 45, married in 1985. In divorce papers, which were made public, Dina claimed that her husband was abusive and a philanderer. Michael, meanwhile, originally sought half of Dina’s earnings, which she makes as Lindsay’s manager.

Michael is currently serving time in prison for crimes including assault and driving while impaired. 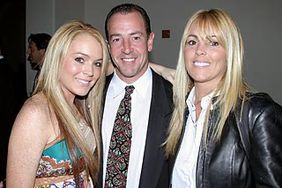 Lindsay Lohan: I Worry About My Mom