Lindsay on Wilmer: He Flirted Too Much

Lindsay Lohan is clearing up the mystery of why she and That ’70s Show star Wilmer Valderrama broke up.

As the 19-year-old promoted her Herbie: Fully Loaded in London, she told the Sunday Telegraph that Valderrama was a player.

“There’d be all these girls around, and he’d flirt with them, and I couldn’t handle it,” she said. “When we first broke up, I was hurt and bitter just because I didn’t know how else to react.”

Besides who she’s dating – no one at the moment, she said – the constant question about Lohan also came up: her weight loss. She defended the way she looks and feels.

“I was eating junk food and not working out and not being healthy. So now I work out and I eat healthier and I take care of myself,” she said.

Regarding warnings she’s received about being “too thin,” she replied: “I was never on a crash diet because that’s not what I do. I could never be one of those girls who throws up after eating. And my mother would kill me if I did anything stupid. But I’m happy to have lost weight, and I’m working at keeping it off. Besides, Kate Moss is my fashion icon.”

Lindsay: I Was 'Nice' to Crash Photog 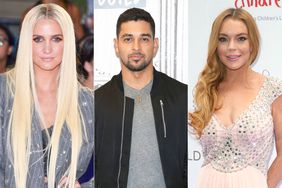 Wilmer Speaks Out on Lindsay & Ashlee