Lindsay Lohan’s father, Michael Lohan, crashed into a telephone pole in Syosset, N.Y., early Saturday morning and was able to escape the 2005 Volvo he was driving just before it was completely destroyed by fire, according to Nassau County police.

Lohan, 44, who was alone in a friend’s car, was arrested and charged with driving while under the influence of alcohol and driving with a suspended license, police say.

He was taken to a nearby hospital after the 12:15 a.m. accident and then held on a $40,000 bond in the Nassau County Correctional Center.

On Tuesday, Feb. 22, Lohan appeared in Nassau County criminal court, and bail was remanded. His attorney, Dominic Barbara, has not returned calls for comment.

Last week, Lohan saw his estranged wife, Dina, in a divorce court in Mineola, N.Y. It is the first time Lohan has been in the same room as his wife since last spring, when Dina (who filed for divorce on Jan. 18) took out an order of protection against Michael following a widely publicized fistfight he had with her brother at a family party.

“It took a toll on him when he saw his soon-to-be ex-wife. It was traumatic when he saw her, and he’s upset because Lindsay hasn’t been feeling well,” a close friend of Michael’s told PEOPLE.

In December, a judge issued an order of protection against Michael to include his four children. Lohan is officially barred from contacting his 18-year-old actress daughter. “He has lost his family,” says the friend. “He is a lost soul.”

Dina, reached by PEOPLE on her cell phone Saturday night, declined to comment and referred calls to her spokesman, Sean Cassidy of Dan Klores Communications. A call to Cassidy was not returned.

The incident is the latest in a series of run-ins with the law for Lohan. In the fall, he was arrested twice for violating an order of protection taken out by Dina, and once for driving while under the influence of drugs. In December, Lohan was ordered to serve 28 days in an upstate New York rehab clinic.

Meanwhile, Lindsay Lohan has legal troubles of her own. On Feb. 2, the Mean Girls star was sued by two people who claim she injured them in a traffic accident in Studio City, Calif., on Aug. 3. 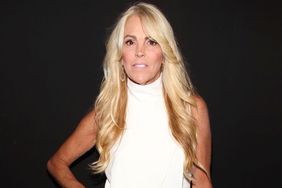