Lindsay Lohan and Wilmer Valderrama have ended their relationship, the That ’70s Show star’s rep confirmed to PEOPLE.

No details were available on when or why the two split, but “they’re still friends,” says Valderrama’s rep, Heidi Slan.

“She is working on her film, shooting some magazine covers and preparing for her appearances on all major New York shows for her album,” says Sloane Zelnick.

Lohan, 18, and Valderrama, 24, were first spotted together in May, but they didn’t publicly acknowledge their relationship until her 18th birthday in July.

At the Teen Choice Awards over the summer, Valderrama told PEOPLE that he and Lohan had kept their romance a secret because that made it more special.

“We try to keep it more under wraps because it is a lot more meaningful that way,” he said. “At this point we don’t need all the free press.”

Valderrama was by Lohan’s side during her recent hospitalization for exhaustion and a high fever. The star of Mean Girls spent several days at Cedars-Sinai Medical Center in Los Angeles before returning to work on her upcoming feature Herbie: Fully Loaded. She also appeared as a guest star on Valderrama’s sitcom this week.

Lindsay on Wilmer: He Flirted Too Much 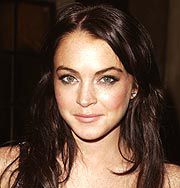