Lindsay Lohan and DJ gal pal Samantha Ronson canceled a Valentine’s Day gig in South Florida, saying they are too sick to travel.

They were scheduled to host and spin at Passions, a late-night club connected to Hollywood, Florida’s Seminole Hard Rock Hotel & Casino.

“We really feel bad, and I work sick when I can, but unfortunately I couldn’t drive to Miami, so I’m stuck in New York City with doctor’s orders not to fly,” Ronson tells PEOPLE. “Any reports otherwise are false and unfair.”

“Lindsay and Samantha stayed out late last night in New York City, and are not feeling well,” Amanda Senoff, director of marketing for Passions, tells PEOPLE. “A doctor said Sam was too sick with the flu to travel and Lindsay is also feeling sick. So they rescheduled for March 7.”

A source close to Ronson tells PEOPLE, “They are both sick with ear infections. Sam needs her ears, and flying with an ear infection is a risk that she can’t really afford to take.”

The situation leaves Passions, which was paying big bucks for the popular pair to entertain, without a headline DJ and host for the combined Valentine’s night/President’s Day weekend, the busiest time of the year for south Florida tourism.

“I conferenced all of Lindsay and Sam’s managers for three hours today trying to remedy the situation, and they agreed the girls are sick,” adds Senoff, who recently joined Passions after a similar stint at Borgata in Atlantic City. “What can I say? I am disappointed because this is my first booking for Passions, but these things happen.”

• With additional reporting by ALYSSA SHELASKY 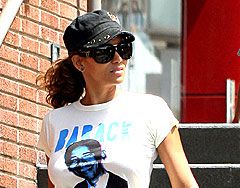