"She's moving ahead with her life," the star's mother tells PEOPLE

Lindsay Lohan has checked out of the exclusive Cirque Lodge Treatment Center in Utah, where she has been since August, multiple sources, including both of her parents, confirm to PEOPLE.

“She’s finished the program,” one source says. “Lindsay is done, but she may come back for outpatient treatment. She over-extended her stay because she wanted to. She could have been out awhile ago, but she chose to stay.”

Lohan’s mother, Dina, told PEOPLE Friday: “I’m proud of her. She’s moving ahead with her life. Things were getting out of control. She took action. She took responsibility. She really needed to heal.”

Lohan was photographed Friday afternoon with her father Michael, who carried her suitcases, leaving Cirque Lodge. “I will be there in her life as best I can but from here on she’s going to have a lot of decisions to make on her own,” Michael told PEOPLE Friday. “Now that she is going out into the world, I can only hope for the best.”

The father and daughter reunited last month for the first time in three years when he paid a visit to her in rehab. “I’m enjoying my time with Lindsay and I’m happy to see and believe she’s the Lindsay I last saw three years ago, before all this turmoil came into her life,” says Michael. “I am trying my best to lead by example and institute important tools.”

Of the actress’s reunion with her father, Lohan’s mom, Dina, told PEOPLE recently: “It can only help her recovery. It’s time to mend.”

And Lohan is already gearing up for her return to work: A source says she has plans to start filming her tango-themed move, Dare to Love Me, in Los Angeles on Oct. 15. Plus, says the source, despite reports suggesting Lindsay is an insurance liability for film studios, Lohan has been insured for this film.

“Lindsay will start her life over,” says the source. “She’s gotten rid of the people around her who were bad influences.”

Lohan’s treatment there began in the weeks following her early morning July 24 arrest in Santa Monica, Calif., on suspicion of drunken driving after a brief car chase.

At the police station, Lohan, 21, was searched and a “small” amount of cocaine was found in her pocket, said Santa Monica police spokesman Lt. Alex Padilla.

Immediately after she was booked, her attorney said that Lohan, who had recently completed a six-week stint at Promises rehab center, had “relapsed” and was receiving “medical care.”

A month later, at the time her lawyer negotiated a plea deal for Lohan in her DUI cases, the actress issued a statement in which she accepted responsibility for her actions and said she suffers from drug and alcohol addiction.

“It is clear to me that my life has become completely unmanageable because I am addicted to alcohol and drugs,” her statement said.

Lindsay Lohan's Mom: I Won't Give Up on My Daughter 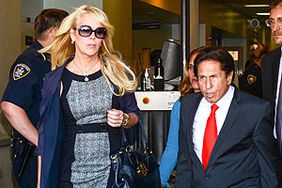 Lindsay Lohan: 'I Am Addicted to Alcohol and Drugs'