Lindsay Lohan is back at work, her rep confirms to PEOPLE.

A source close to the situation says Lohan’s latest movie, the thriller I Know Who Killed Me, began shooting again on Thursday, and her scenes are scheduled to start filming Friday.

“People were getting a bit antsy about what the status was, so it’s pretty thrilling,” says the source. “As soon as Lindsay was cleared, they started everything back up again.”

The source added that Lohan was likely to resume a full workload, which a rep for the movie described earlier as 13 to 14 hours a day. “As far as I know, she’ll be back on schedule and working a full day,” said the source.

Lohan, 20, checked into the Wonderland Center, an addiction-treatment facility in the residential neighborhood of Laurel Canyon in L.A., last week. She called the move a “proactive decision to take care of my personal health.” In December, she had revealed that she had been attending Alcoholic Anonymous meetings for a year.

Even before she checked into rehab, production on the movie had already been on hold due to Lohan’s recent appendix surgery.

A friend of Lohan’s tells PEOPLE in its current issue that Lohan said her stint in rehab was “the happiest she has ever been.” 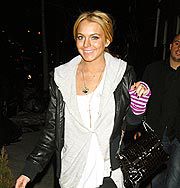