Lindsay Gets Cozy with Paris's Ex

How better to get back at a nemesis? If you’re Lindsay Lohan, you start by dating her ex-boyfriend.

Lindsay Lohan and Stavros Niarchos were first spied together five days before he and Paris Hilton broke up last month. Now it’s clear that was just the beginning of a beautiful friendship, PEOPLE reports in its new issue.

Lohan, 19, and Niarchos, 21, were spotted kissing on May 15 at the Manhattan nightclub Butter. The next evening, they partied together at Bungalow 8 until 3 a.m., and on May 17 they caught an Elefant concert at Webster Hall before meeting friends at Bungalow 8 once again.

Although sources confirm the two are hooking up, Lohan was also spotted smooching British singer Jamie Burke on May 7 and hanging out at clubs with X-Men: The Last Stand director Brett Ratner in April.

As for Hilton, she seemed unfazed at the Cannes Film Festival on May 20 as she danced and sang Rod Stewart’s “Do You Think I’m Sexy” atop a table at a party hosted by Suite Miami. 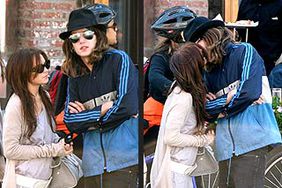