It’s confirmed: Lily Allen will wed Sam Cooper on June 11 in Gloucestershire, England. But the pop star isn’t happy about how the news broke.

Someone who was invited to the nuptials apparently sent the save-the-date card to the British newspapers, leaving Allen, 25, fuming.

“Oh and whoever leaked my wedding invite to the press, you’re a [expletive] and your[sic] not invited anymore, have some respect and stay at home,” she wrote Wednesday on Twitter.

The card itself amusingly shows Cooper and Allen’s faces crudely Photoshopped onto the bodies of a frumpy couple riding a tractor.

Cooper, an upmarket decorator and owner of a building company, reportedly popped the question to Allen over the Christmas holidays, following a rough year for the couple, who in October lost a baby they were expecting.

Allen has been deep in wedding planning of late, reportedly meeting with Chanel’s Karl Lagerfeld in Paris this month to talk about her dress. 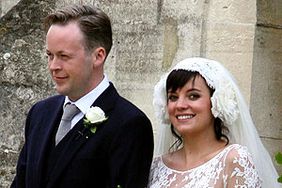 Lily Allen Is Married – and Pregnant!

Lily Allen Is Married - and Pregnant!