Renée Zellweger, who in September filed to annul her four-month marriage to Kenny Chesney, denied reports that she's dating Irish singer Damien Rice – but she's hardly sitting at home: She was spotted Oct. 1 at a Boston Red Sox game (left) chatting up Jennifer Garner and Ben Affleck. Chesney, whose new album comes out Nov. 8, told Country Weekly that he's taking a break, and when he gets back to work, "it'll be about the music again, not the sideshow."

Though a source tells PEOPLE they're through, Jude Law and Sienna Miller can't seem to say goodbye. After splitting with her fiancé last week, Miller (in London on Oct. 6) flew to a Moroccan resort, then reunited with Law in Paris. And as for being linked to actor Daniel Craig, she insists, "There's nothing going on." Meanwhile, Law (on Oct. 7, at son Rafferty's soccer game) is "moving on," says a pal. "He's not dating anyone. He's regrouping his life and focusing on his family and work."

"We need to talk and decide what to do," Tori Spelling told PEOPLE in September after announcing her split from husband Charlie Shanian (in Beverly Hills in May). Looks as though Shanian has made his decision: The writer-actor has filed for divorce from his wife of one year, and is asking for spousal support. Meanwhile, Spelling, who has been linked to actor Dean McDermott, has been in Tacoma, Wash., filming the low-budget thriller Cthulhu.

After separating in September after five months of marriage, Sophia Bush and Chad Michael Murray (in L.A. in April) face two challenges: working together (on the Wilmington, N.C., set of their WB show, One Tree Hill) and deciding the fates of their five rescued dogs. "They are working just as hard figuring out the right answer for the dogs' welfare as they are making sure that their separation doesn't distract from their work on the show," says a pal.

In September, A.J. DiScala admitted that he and his Sopranos star wife of two years, Jamie-Lynn, had separated – but there was hope for a reconciliation. "Anything is possible," he said. But the formerly inseparable pair (in New York City in June) have been spotted with anyone but each other lately: He partied with pal Nick Lachey several times last month; she hit a charity event in New York City last week, taking care to hide her ringless left hand from photographers.

Paris Latsis and Paris Hilton (at a Beverly Hills restaurant on Oct. 5, after their split last month) seem to be bouncing back from the end of their four-month engagement. Hilton has been club-hopping in L.A. and Las Vegas and spending time with another Greek shipping heir, Stavros Niarchos III. As for Latsis, his father, Gregoris Kasidokostas, tells PEOPLE, "He is not mourning and he is not depressed. Now he may be sad, but that's normal. He is not insensitive." 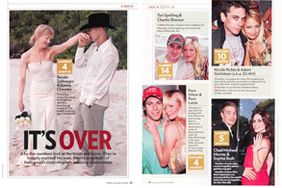